The first two weekends in October are a special time of year in Adams County because it’s time for the Apple Harvest Festival!

This festival is certainly one of the anticipated highlights of the fall in Gettysburg! It is located 10 miles away at South Mountain Fairgrounds on Route 234 near Arendtsville, PA. Attendees can expect hundreds of arts and crafts dealers, demonstrations, contests, food stands, entertainment and of course, apples!

Just to name a few, some of the attractions include: 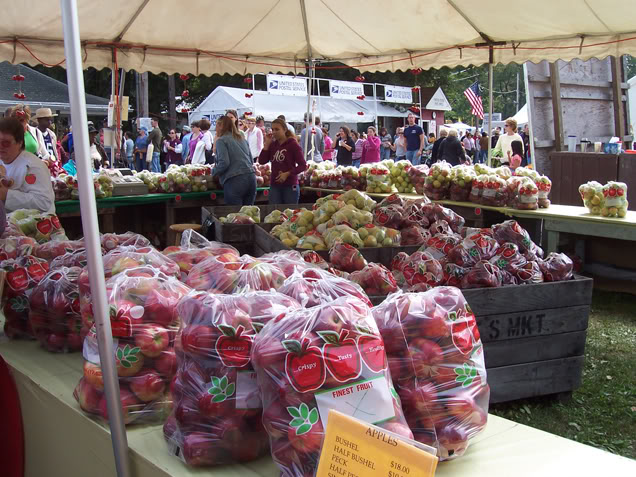 The festival! image courtesy of the Tasty Planner Blog (click for original)

The festival has a rich history, too. It began more than 45 years ago by the Adams County Fruitgrowers Association after having successfully run Apple Blossom Sunday since the early 1950’s. In 1961, under the chairmanship of Donald Trostel and Clair Fetters, the “1st Apple Harvest Holiday” was held on Sunday, October 14th.

The Upper Adams Jaycees, chartered in 1962 and eager for a fund-raiser, contacted the Fruitgrowers and after negotiations, attempted to organize the event themselves in 1965. With only $200.00 in the treasury, Co-Chairmen Robert Reed and Mac Lott were named to head up the project. The Apple Harvest Festival got its official debut on Sunday, October 9, 1965. Featured attractions were an antique car display, the apple cider press (still used today), an apple butter boil, pony rides, orchard bus tours, apples desserts, apple and apple product sales, candy apples, commercial displays, souvenir booth, the 1965 Apple Blossom Queen and a Dutch style meal. It has since expanded to what it is today, which spans two weekends!

The festival is 92 miles from Washington D.C., 73.5 miles from Baltimore, MD, 53.8 miles from Harrisburg, PA. Spend the weekend in Gettysburg and enjoy the festival!