An Apple a Day in October 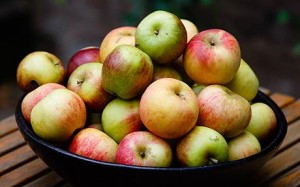 This post is in celebration of the first day of October and the first day of the National Apple Harvest Festival tomorrow! (Read more about the festival in a previous post). Try these fun ideas from the October issue of Food Network Magazine for enjoying an Apple a Day. While you’re in Adams County (a.k.a. Apple Country)  be sure to stock up!  See if you can try all the different varieties (there are over 20) and pick your favorite. Don’t forget, we offer complimentary apples from Hollabaugh Bros. at the Gettysburg Hotel front desk and the Farmer’s Market is on the square Saturday mornings!