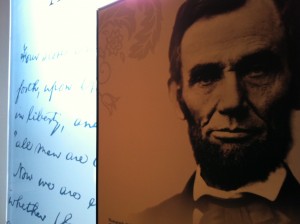 Saturday, November 19th marks the 148th Anniversary of President Lincoln’s immortal delivery of the Gettysburg Address. In honor of the anniversary, there are many events going on in Gettysburg including a ceremony and parade through downtown Gettysburg. Dedication Day is held annually on November 19th and Remembrance Day (a day to honor the brave men who gave their lives fighting in the nation’s most famous battle) is always held the Saturday closest to Dedication Day. This year, they both occur on the same day.

Make your plans to visit Gettysburg and partake in these historic events:

“It’s going to be a great time to visit Gettysburg,” said Norris Flowers, President of the Gettysburg Convention & Visitors Bureau. “We’re encouraging visitors to stay the weekend and see the many attractions which help highlight this battle and Lincoln’s famous speech that followed.”

The day starts at 9:30 a.m. with a Wreath-Laying Ceremony at the Soldiers’ National Monument in the Soldiers’ National Cemetery. The Dedication Day ceremony – featuring keynote speaker and actor Stephan Lang, along with Lincoln presenter Jim Getty – follows at 9:45. The ceremony includes remarks, Civil War-era music and the reciting of the Gettysburg Address.

At approximately 11 a.m., immediately following the Dedication Day Ceremony, a Salute to U.S. Colored Troops will follow near the eastern portion of the cemetery. This salute will feature soldiers re-enacting the U.S. Colored Troops, along with presentations by historian Deb McCauslin and Getty.

The Remembrance Day Parade begins at 1:30 p.m., and can be seen from High Street, Baltimore Street, and Steinwehr Avenue. A ceremony will follow in Zeigler’s Grove at the Gettysburg National Military Park. The parade attracts re-enactors from as far away as Europe, said David Demmy, President of the Sons of Union Veterans of the Civil War, the organizers of the parade.

The day is capped off with a Remembrance Day Illuminary in the Soldiers’ National Cemetery. There, volunteers through the Gettysburg Foundation will place 3,500 candles and flags on the graves of Civil War soldiers. Candles are lit at 5:30 and the event is open until 9 p.m.

For more information on Dedication Day or Remembrance Day, call the Gettysburg Convention & Visitors Bureau at (717) 334-6274 or visit www.gettysburg.travel.