Summer nights at the movies — what a great tradition! 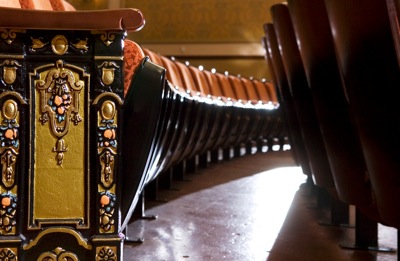 The Majestic Theater has pulled back the curtain on its 2013 Summer Classic Movie Series. Every Wednesday evening, beginning June 5, you can enjoy some of the greatest films in American cinematic history in the beautifully restored historic theater.

Built by Henry Scharf as an annex to the historic Gettysburg Hotel, the theater seats 1,200 and has proudly served as the cultural crossroads of commerce, college, and community for more than eighty years.

Founding Executive Director of the Majestic Theater (and film buff) Jeffrey Gabel introduces each film in his signature style, so you’ll come away with a deeper appreciation for their cultural and aesthetic significance — and enjoy the storytelling, too.

All the films are presented in BluRay HD on the Theater’s giant digital screen.  Showtimes are Wednesdays, 7:30 pm.

Oh — and tickets? They’re priced at $6/person and include free raffle prizes and the movie expertise from Mr. Gabel.

It’s a great way to spend a summer evening at one of the classic movie theaters in the United States — right here in Gettysburg.

Get your tickets here.