In an exhibit that coincides with Gettysburg College’s American Civil War Sesquicentennial Commemoration, artifacts and documents on loan from the private collection of Angelo Scarlato. Mr. Scarlato has been collecting material and ephemera related to the 19th century African American experience, the Battle of Gettysburg and Adams County for over 30 years.

Visitors to Musselman Library’s Special Collections at Gettysburg College will trace the journey of African Americans from the antebellum period through the Civil War, Emancipation, and citizenship into post-bellum America.

2013 marks the 150th Anniversary of the enactment of the Emancipation Proclamation, the Battle of Gettysburg and the Gettysburg Address. For additional information, visit Gettysburg College 150th Commemoration of the Civil War. 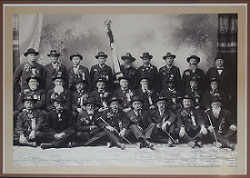 What You Need To Know

Exhibit collection courtesy of Angelo Scarlato
Student Curator: Lauren Roedner, Class of 2013 with special thanks to Africana Studies, the Civil War Institute and the Sesquicentennial Committee.