Sips of the Susquehanna 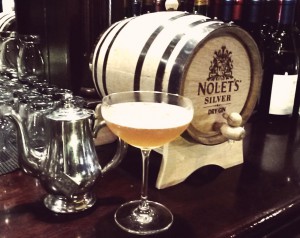 One Lincoln, Gettysburg’s Award Winning signature restaurant, has joined forces with Susquehanna Style Magazine to bring you Sips of the Susquehanna and the Old Chai-Town Signature Cocktail for the month of September. Eight restaurants throughout the Susquehanna Valley have been selected to create custom cocktails perfectly fashioned to bring you into the delicious tastes of autumn.

Peter Bales, One Lincoln’s Restaurant Manager and Mixologist, was inspired by the old world location of the restaurant in downtown Gettysburg and wanted to create a chai tea based cocktail. Prior to the emergence of the ‘modern cocktail’ in the 1920’s using hard liquor, tea was use as the base for cocktails. These originated in Japan, but here in the states, we used tea in alcoholic beverages, mainly in punches for grand balls.

One Lincoln was given a Nolet aging barrel by Diageo and Peter used it combined with Nolet’s award winning gin to create the base for this seasonal favorite. The gin has natural floral hints in its flavor, but when aged, it takes on the oaky quality of the barrel. The range of flavors can vary widely because each barrel is unique. Diageo provided a few cocktail ideas, including mixing it with tea, and Peter ran with it!

He starts by steeping the chai tea, then boils it with honey, nutmeg, cinnamon, ginger root and bitters to infuse the flavors. Once brewed, he mixes the tea with the aged gin and shakes it to wake up the fall flavors.

Here’s how to enjoy this beverage on the Sips of the Susquehanna Tour for the month of September.

You will then be entered for a chance to win gift cards to the participating locations!