How Sweet It Is…

Welcome back to our baking discussion focusing on our two preferred Pastry Chefs, how they got their starts, and the trends we’re seeing this year. For today’s post, I sat down with Delisa Wells, owner and Pastry Chef at Wells Family Baking Company, to see where she got her start and how her journey brought her to Gettysburg, and most importantly, why we offer her cakes in your wedding package. 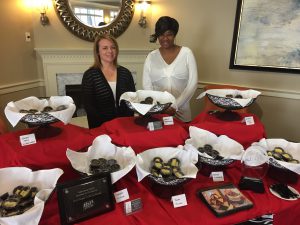 Delisa first started her baking career in 2001 while attending York Technical Institute and studied Pastry Arts until she graduated in 2002. After graduation, she began working for a bakery in Downingtown for a few years until she took an internship at Kiawah Island in South Carolina. While there, she met her husband and business partner, Orrin. At the end of her internship, Orrin got a job offer here in Gettysburg and Delisa put her talents to work in New Cumberland at Dingeldein Bakery before settling in at Seasons Bakery here in Gettysburg. For those of you who have lived in Gettysburg for a while, you might remember the place. Eventually, when the owner decided to sell the business, Delisa and Orrin jumped at the opportunity and everything fell in line.

When I asked her about the business name, why it’s not “Delisa’s Cakes” or “Delisa-icious Cakes” (I promise, I’ll keep working on my business naming skills), she replied that it was not just a cake company. When they opened their storefront here in town, her husband jumped on board as the Executive Chef and they offered made to order foods, sandwiches, soups, fresh breads, pastries, cookies preordered desserts, and of course, wedding cakes.

Business was great in downtown, but food is perishable and the products have a short shelf life. After much deliberation, they decided to move their business to the Intersection Church where she rules the kitchen and now only offers pre-ordered items, switching their business model to a by order only bakery. This has allowed her more time to hone her craft and focus on her passion… creating the perfect wedding cake… just for you! 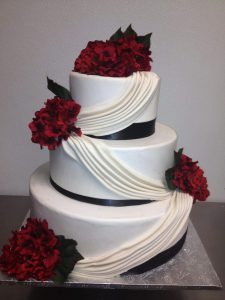 “Being able to create something that they couple will look at for years to come,” she says is the most rewarding part of what she does. Looking back on those memories, reliving the moments and knowing that her work was a part of the day makes it all worth it! I asked her if she felt there were any challenging part to her job and she was hard pressed to find an answer and said, “Nothing. It’s cake… no pun intended!”

Delisa offers a wide variety of flavors, the most popular of which are the typical standards, though yellow cake with strawberry buttercream and chocolate with raspberry buttercream do have the edge. Her husband, however, would protest that the hazelnut chiffon with hazelnut mousse is the winner by far. Sponge cakes, which have a similar lightness to an angel food cake and chiffon cakes, which are incredibly light and airy are the most requested thus far this season. When she bakes them, she’s exceedingly careful with the batter so it doesn’t fall flat.

This year’s trends seem to be pretty consistent as far as finishes go; simple, clean cakes with smooth icing coupled with fresh flowers. The fall weddings had lots of burlap ribbons and seasonal flavors such as spice and pumpkin. She’s noticed a heavy shift in colors for the seasons with a lot of coral for the spring and summer and jewel tones like teals and purples later in the year. I asked her about the cupcake craze and she said “Thank you Jesus, the cupcakes are going out!” Cupcakes are a great idea and we all understand the appeal, but from a baker’s perspective, they’re much more difficult to transport and setup. Another thing she said she does not see coming back anytime soon is fondant. Did you know it’s not supposed to be eaten? I just learned that this summer and can hopefully spare you from making the same mistake I did!

One really fun part about Delisa’s cakes are that you get to combine whatever flavors and icings you wish. Most times, they’re pretty normal pairings, but sometimes couples surprise her when they sit down and start pairing flavors at their tasting! Recently, she’s had two couples in a row pair the orange cake with chocolate ganache (sounds amazing to me) and two other couples chose red velvet with lemon buttercream. She has no limitations on combinations of flavors or tiers, which can sometimes be a means of compromise for indecisive couples.

“I really try to put as much thought and effort into creating something special for my couple’s wedding days, treating it as if it were my own. I treat every individual as if this is my first time doing something for them. Just because I’ve been doing this for 15 years, I listen to what they want and create it.” ~ Delisa Wells